With in minutes of pushing away from the car all my boys are getting settled. 6-month-old Revel has turned his cries into happy squeals.  3-year-old Max is busy chatting away from his big boy perch on his “Shotgun” bike seat.  And 45-year-old Jason is smiling as he navigates his mountain bike down the overgrown trail.

Just a few short hours before this we had all woken up in a groggy stupor.  All of us were on the mend from a head cold. Even Revel who’d never been sick before in his short life had woken up with a runny nose and red eyes.  Many families would’ve throw in the towel and waited for another window to go on a trip,  but we’d been cooped up inside for long enough. As John Muir once said, “The mountains are calling, and I must go”.

By 9 am, we were on the road, coffee in hand with two boys strapped into their seats chatting and giggling away with one another.  I looked back and was reminded of a long time lesson Jason and I know all too well through adventure racing: “this too shall pass.”

Just minutes before getting in the car, Max was yelling “I don’t want to go, I just want to stay home!”, while a tired Revel was crying away wanting constant attention. It would have been way to easy to let Revel take a nap and play with Max on the back deck.  But over and over again, they impress me with their adaptability and quickly changing attitudes. Just like I often surprise myself in the middle of a race – my feet will be in complete agony and then with in minutes of cresting a mountain to a new view I am reinvigorated and totally forget about my feet.

Late in the afternoon, after a beautiful drive where we stopped for fresh fruit and only a handful of potty breaks we had arrived at our staging spot for the bike trip. We knew that with the kids the transition time needed to be short, so we organized our small car the day before.  The Yakima racks and top box did the heavy lifting – carrying everything we needed for our 3 nights in the wilderness, which allowed for the backseat to turn in to the “disaster” area that always comes with kids on long drives – a mix of half-eaten snacks, diapers, toys, blankets, drool and random rocks from every stop.

Within minutes of stopping, we had the Thule Chariot built up, sleeping bags and food packed.  I was pulling Revel in the loaded down double chariot full of enough food, diapers, and clothes for the duration and Max was riding with Jason on his beloved Shotgun seat. 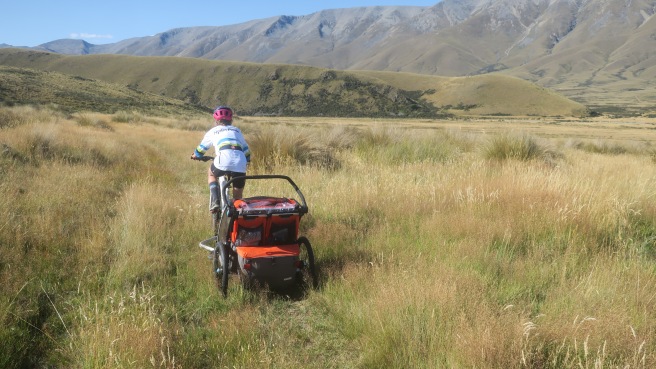 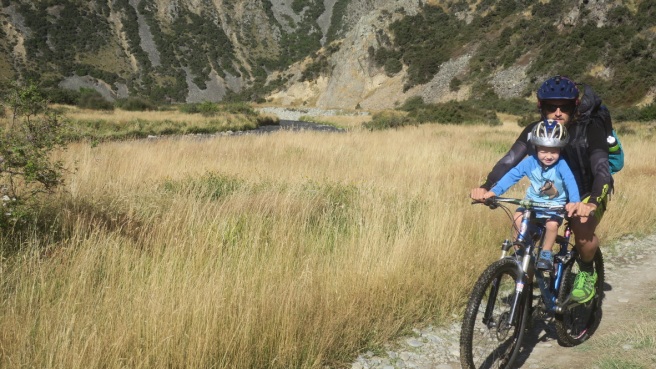 The evening’s objective was to get to the first hut, up a bumpy four wheel road that climbed up a river valley.  I was very tentative pulling Revel, carefully picking my line through the rocks and big dug out grooves, but after multiple reassurances from Jason that the chariot and Revel could handle a lot more I stopped overthinking.  With every passing km, river crossing and happy squeal from Revel I became more and more confident.  By the time we reached the hut, I was getting into my rhythm and felt like a chariot pulling pro. Max and Jason were feeling equally as stoked, Max loved all 8 of the river crossings and was so excited to sleep in a hut in the mountains. 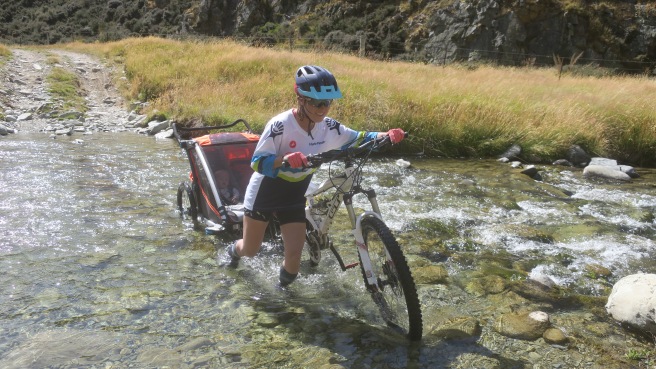 About the huts…New Zealand is littered with huts. Along every track, wether it is for bikes, hikers, 4×4’s or horses,  you can be assured that there is a a hut out there.  Even many places that don’t have any trails, there are huts accessible only by paddling or bush-bashing.  Most are simple, but come complete with bunks, foam mattresses, a table, a sink and a wood stove.  “Standard” huts fees are just 5$ a night on the honor system- just drop your hut ticket into the box.

That first night in the hut, we read by headlamp, told stories to Max and listened to Revel snore away.  I laid awake, thinking about how we could just live like this all the time: biking, hiking and adventuring between huts. 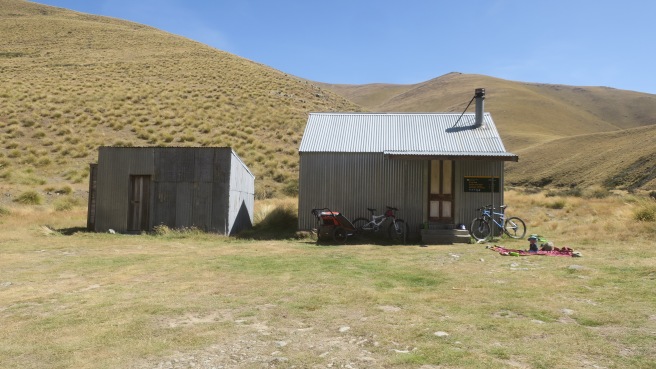 The next morning, we were woken up by a jabbering Revel.  It was amazing feeling and seeing the difference in all of us after being in the mountains for one night, Max woke up ready to go and so were Jason and I.  Hut coffee always tastes especially amazing that first morning.  We spent the first few hours of the day playing in the river and slowly packing up, assuming that the ride up to the next hut was a bit easier. I don’t know where we got that information however, because just as we were about to set off, a fellow adventurer on their way out stopped to chat.  “Good on you all” he marveled, eyeing the loaded Chariot and it’s tiny passenger.   “You have quite the ride in front of you!  At least a dozen river crossings and a bumpy road is ahead!”   But his attitude was full of the typical Kiwi excitement. It was clear that he was both impressed and in approval of our family adventure.

But I was filled with mild dread at the thought of another tough day dragging the boys up hills and across rivers.   Max ran up to the stranger brandishing his favorite toy,  “look at my monster truck, it won’t get stuck in the mud!”  And just like that I was reminded of why were out here – to be with our boys on this awesome adventure.

Shortly into the ride, we hit our rhythm once again. The bumpier Revel’s ride, the deeper he slept.  Max chatted away about monster trucks driving through the mud, and I got even more confident about pulling Revel. By the end of the day I could almost keep up with Jason.  Hours later, the fatigue was real for everyone.  When we turned into a hidden valley and Max yelled: “HUT!!” we all whooped and pedaled a little harder.

At the hut we unloaded, had a picnic and eyed our last objective – the majestic Omarama Saddle.  The distance from the hut to the saddle was only 1 mile, but the rough track maintained a 20% incline grade, climbing 1000′.  It would be a brutal mile.   Jason played with the boys as I ran up the hill to check out just how bad it was.

No doubt about it, this last objective would also be the hardest.  An hour later, I returned from my run, having made it.  The views and trails from the top were endless. Once again, I started dreaming about being out there for ever.

I encouraged Jason to take Max on the bike, while Revel and I stayed at the hut to cook dinner.  With the NZ sun beating down, they set off.  The loose rocks and angle forced Jason to push the bike (with Max still riding shotgun) for much of the way.  They even had to stop for an adventure race style cat-nap on the rugged slope when Max fell dead asleep in the saddle.  But after 5 minutes of “passed out in a sweaty dirt pile” and a few gummy treats, Max was eyeing the top again.  With effort comes reward, and Max talked about “climbing all the way up the mountain” for the next week.

The ride back down took only minutes, but I could see some more grey hairs around Jason’s ears when he walked back into the hut.  Max had loved it all.  Jason just said, “a bit sketchy” and then smiled. 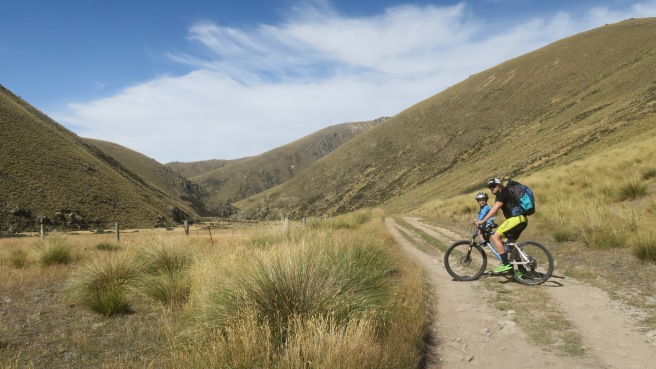 And a dream started developing into a plan.

Late that night, we whispered to one another about timelines, gear and our route. The mountains had not only healed us, they inspired us and left us with another dream. 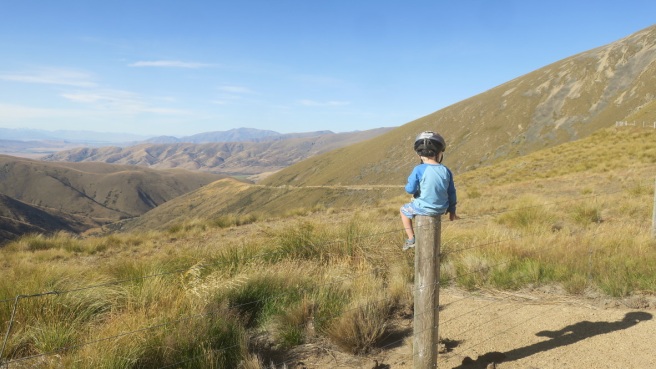 The next morning, surrounded by mountains. Jason and I drank our coffee on a small bridge over the river while Revel squealed and Max threw rocks into the river.  We played as much as we could until the sun became to intense and the shade hard to come by. The gradual downhill combined with our refined “stroller river crossing” skills made the return trip almost twice as fast.  As we enjoyed the easy pace, we had a good laugh thinking back to the start of this journey, where everything from getting the kids in the car to taking our first pedal strokes seemed daunting and an uphill battle UNTIL we got going. Once we were in motion, and on our way, it all get easier. Once again, I was grateful for all the lessons and experiences we had learned from adventure racing.  Taking the first steps on your journey is always the hardest part, but once you are on your way and “in” it, you are left with no other choice but to figure it out and keep going. 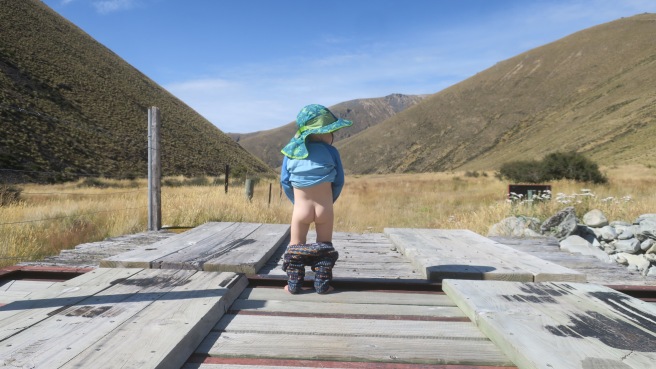 That night, after a long car ride, Jason ordered the guide book for all the cycle trails across NZ and booked us another hut trip for the following week and I have started researching gear. Needless to say, we have fallen in love with another mode of transport!

It’s no surprise that most of the design team have families of their own. Having kids is hard, going on adventures with them can be even harder. Thanks to our top box and racks, all the wet and non essential gear was able to stay out of the car. The top bike racks are also a dream to work with. They are easy to use, making our transition from car to bike seamless and fast.. which is key when you have kids!

This thing is amazing. It has been all over the world with us. Wether it is in airports or out on a 4×4 trail in the middle of NZ, it is a safe haven for our boys. It carries them, their snacks, clothes and sleep gear all while shielding them from the elements. Even on the bumpiest of roads, thanks to the suspension, it gave Revel our 6 month old a comfortable ride. He was either happy as a clam babbling away or snoring.

This seat is Max’s favorite. He has been riding on one like this one since he could sit and hold on to the handle bars. Not only does it naturally teach him balance and bike handling skills, but it sits him up with you which is so much fun. I love riding along talking to him. He feels part of the action, and I am able to go at my pace. Also, after riding on this for a while with us, he started riding his balance bike with so much more excitement and confidence.  If we could give one gift to every parent in the world it would be this!

This outdoor water resistant blanket is a life saver. It doubles as a picnic blanket and a sleeping quilt. We always had it ready to go in the chariot to keep Revel warm and cozy.

While outside all day, it is important to stay sunscreened up. We love Jtree because the ingredient list is so short and full of good stuff. Plus it smells nice and is easy to put on two wiggly boys. 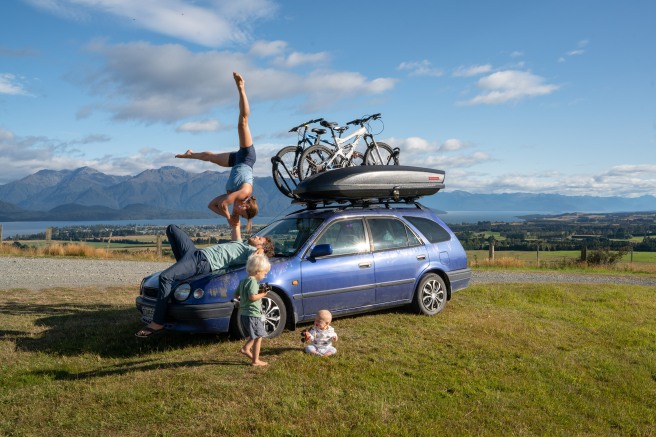